Please be aware of fake job postings, we are not currently hiring.

Our doors will continue to remain open unless we are mandated by local, state, or federal authorities to temporarily close. We understand that access to a place to work, as well as to your files, printers, and hardware, are essential to staying in business.

With that in mind, your health and safety come first, and so we wanted to share our latest updates to our cleaning practices in order to keep CoWorkTampa as a safe, healthy environment where you can go to work.

Our standard cleaning protocols have been increased. This is especially important on hard surfaces, and in particular those that are frequently touched such as door knobs, refrigerator handles, and desk surfaces. These will be cleaned more frequently during the day, as well as each night by another cleaning team.

We have some suggestions for our community:

2. Please cover your mouth either with a tissue or your elbow area when coughing or sneezing.

3. If at any point you have these symptoms, we ask that you please stay home and/or visit your medical provider in order to prevent getting others sick.

We will continue to monitor this pandemic closely and will update you if anything changes. If you have any questions at all, please feel free to reach out to us at vip@coworktampa.com.

This too shall pass!

We will all get through this together. Thank you for your cooperation as we navigate through these next couple weeks.

There are plenty of perks to being a CoWorkTampa member, but one of the best has got to be all of our member events. Our awesome team works hard to put together these events that give our members the opportunity to relax, enjoy some great food, and connect with everyone.

Gasparilla is one of our favorite events here in Tampa, and to get in spirit, we celebrated with Gasparilla themed doughnuts! 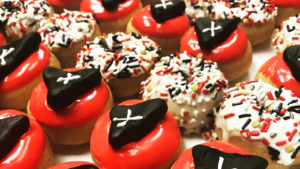 Pizza and a chocolate fondue fountain. What more could you want to celebrate Valentine’s Day? 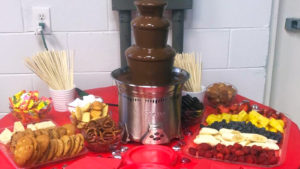 Our members enjoyed a variety of foods (and of course, beer) to celebrate St. Patrick’s Day. 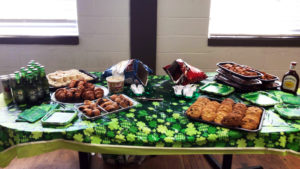 Spring has officially sprung, and we celebrated the new season with a fun member’s lunch. 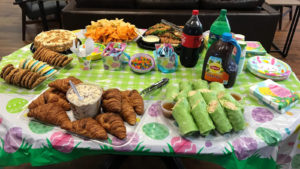 We’ve got plenty of events still to come this year, so be sure to mark your calendars!

Come celebrate Cinco de Mayo with us! We will have a food truck here serving tacos and margaritas.

Lunch is on us today as an early celebration before the 4th of July.

Don’t miss our second annual CoWorkTampa Halloween Costume Contest and pizza lunch! Show up in your best costume for a chance to win some awesome prizes.

Celebrate Thanksgiving a few days early with CoWorkTampa! Bring in your favorite dish to share for our potluck.

Close out the year with us at our holiday luncheon!

These events are just one way for us to say thank you for making our space and community so great. We hope to see you all for our upcoming events later this year.

Are you not currently a CoWorkTampa member? Why not schedule a tour and come see our space to see if we are the right fit for you? Once you become a member you will have access to all our great benefits, which includes these events, as well as free parking, high speed WiFi, private phone booths, and a lot more.

We’re seeking out current CoWorkTampa members who would like to write about their business, as well as how coworking has helped them. These articles will be professionally edited and distributed on the CoWorkTampa website, newsletter, and all of our social media channels. This is a great way for Tampa Bay to learn about your business.

If you are interested, here are some example points you may wish to include in your piece:

In addition to discussing your job, please include some ways that coworking has helped your business. For example, has your time at CoWorkTampa lead to:

Don’t let our ideas limit you!

We want to hear however coworking has benefitted your business. At CoWorkTampa, we believe that coworking is the future of work and allows for greater productivity, more meaningful collaboration, and increased networking opportunities (just to name a few). We value each and every one of our members, and this is just one way we want to spotlight the great companies that call CoWorkTampa home.

Please email your submissions to info@coworktampa.com.

Usually, these are not-so-aesthetically pleasing (or particularly desirable) setups with dead wires coming out of the floors, cheap office furniture set up in a not-so-feng shui manner and blank walls that seem to hum in the glow of fluorescent lighting.

After all, they won’t be there very long, so why get hung up on aesthetics?

Not so for the Tampa leg of Donald Trump’s presidential campaign, though.

That campaign, which should be kicking into gear after Super Tuesday and ahead of the March 15 Florida primary, has instead chosen to go the hip route: it’s rented space at CoWork Tampa, a locally owned spot where professionals (typically, ones who work remotely) can rent workspace rather than contend with noise and shoddy wifi at a nearby coffee shop.

It’s not the first time CoWork Tampa has been the site of political events, at least on the local level. Tampa City Councilman Guido Maniscalco held multiple events there during his run and to celebrate his victory.

Politics aside, having Trump’s campaign staff working the phones and basing their ground game out of the West Tampa site is a big deal for Chris Arnoldi, co-owner of the space, given the attention it brings the site.

“I think it’s great,” he said. “I’d probably have to pay thousands of dollars to get this kind of press.”

So, how did he land that deal?

Basically, someone he works with is a Trump supporter. Said supporter reached out to local campaign officials.

“And that got pushed up all the way to one of his senior advisors,” Arnoldi said.

Since they announced the Trump campaign would be setting up shop there, they’ve been catching grief on social media from Tump’s critics. After all, a place like CoWork seems to be tailored toward Millenials — not exactly a popular demographic for Trump (we admit we may have made ajoke or two about the larger-than-life candidate here and there as well).

Some have gone so far as to say they’ll never use the space again.

“In the past our space has shown support for both Democrats and Republicans,” he said.

Brannan, 37, has worked 12 years from his home in Naples for a telecommunications company, calling on corporate clients around the country. “I’ve got three kids, and I can’t tell you how many times they’ve barged in,” he says. END_OF_DOCUMENT_TOKEN_TO_BE_REPLACED

There might be a new home for nomadic tribes of tech entrepreneurs.

“Cowork” spaces — already successful in Baltimore, Orlando, and Austin, Texas, and many other cities — are shared working environments for freelancers, self-employed, road warriors and any of the work forces who do not normally work in offices. They offer a social gathering for collaboration and connectivity with value stemming from the informal, self-directed and self-filtering of the nomad-workers community. END_OF_DOCUMENT_TOKEN_TO_BE_REPLACED